Working in the world of tech is a highly sought-after career path for many people in today's society. Besides the potential of collecting a generous salary and achieving financial freedom, people working in tech appear to all share a desire to do their part to make the world a better place. One area of technology that stands above the rest is artificial intelligence (AI), making it an essential part of the overall tech industry. In layman's terms, AI is a segment of computer science that focuses on the creation of intelligent machines that work and react the same way humans do. Some examples of these "intelligent machines" include facial recognition, voice recognition, learning, planning and problem-solving. AI systems have also been implemented in society to automate processes, such as recruitment, hiring, courtroom sentencing, surveillance and loans. Whenever you're on social media and see "suggested" ads on your feed based on your taste, that's thanks to AI.

According to EY, AI will only grow in the years to come. It is predicted that by 2025, 95% of all customer interactions will be driven by AI (with customers unable to tell a bot apart from a person via chat or phone); by 2020, 30% of all business-to-business companies will utilize AI to enhance at least one of their primary sales processes, and 88% of European companies will be using AI for customer and business analytics. 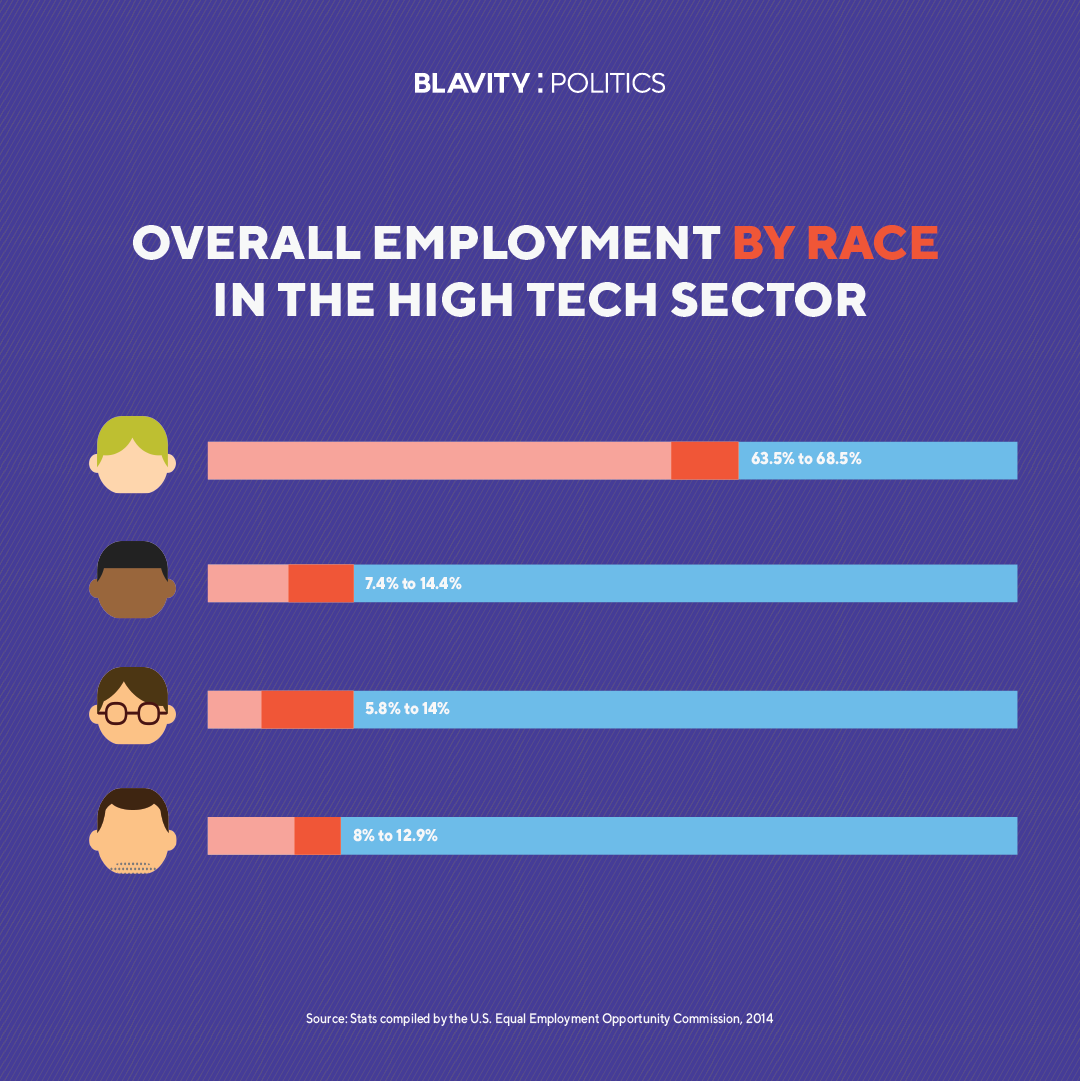 However, one of the more glaring predictions by Gartner is that by 2022, 85% of AI projects “will deliver erroneous outcomes due to bias in data, algorithms or the teams responsible for managing them.” This ominous number reflects a significant dilemma when it comes to AI (and the tech industry in general). The makeup of the people working on and developing AI is mostly White men. Though steps have been taken to improve the diversity among the ranks of tech workers (read: a little money has been thrown at it), the workforce still shows a deficiency in women and people of color. Stats compiled by the U.S. Equal Employment Opportunity Commission from 2014 (the most recent) tell the tale: “Compared to overall private industry, the high tech sector employed a larger share of whites (63.5% to 68.5%), Asian Americans (5.8% to 14%) and men (52% to 64%), and a smaller share of African Americans (14.4% to 7.4%), Hispanics (13.9% to 8%) and women (48% to 36%).” 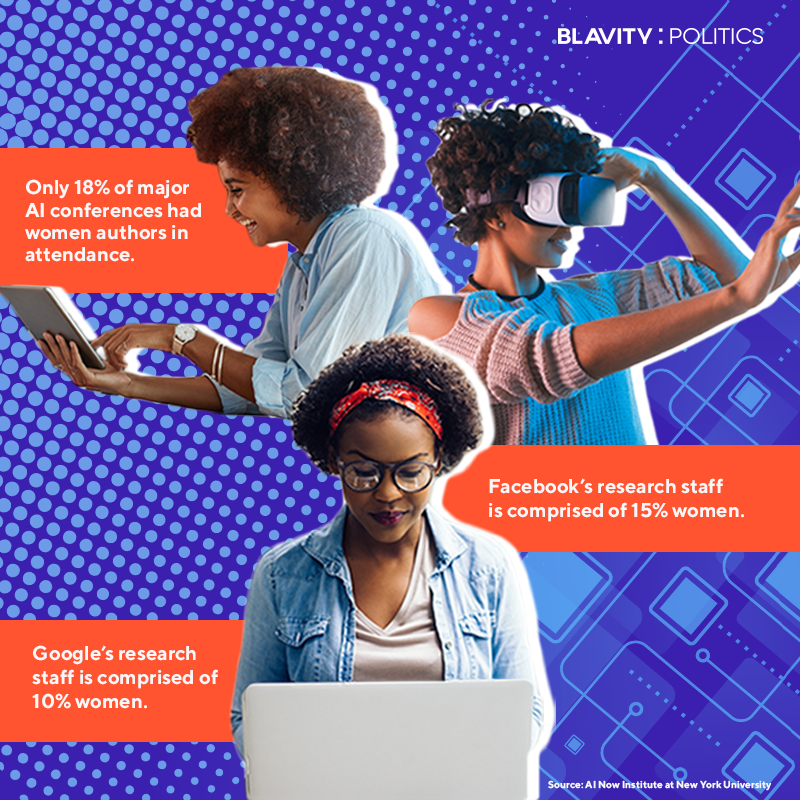 The numbers are just as dismal when you look at the actual AI field. According to a report released this April by the AI Now Institute at New York University, women account for only 18% of authors at AI conferences. When it comes to research staff, Facebook’s is comprised of 15% women, and Google’s is at 10%. With Black people, Facebook and Microsoft teams each consist of 4% Black workers, while Google’s stands at only 2.5%. 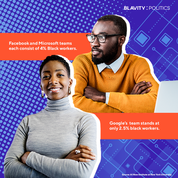 If the point of AI is to make machines as human as possible, it appears that the “human” most tech companies are trying to emulate is a White man. AI is susceptible to bias/discriminatory instincts, so if it’s mostly White men who are building it, there’s a high likelihood that the machines will mirror whatever subconscious biases those White men inherently possess. There have already been examples in the real world of AI acting in biased ways. One would be facial recognition, which is very adept at detecting White faces but has proven to be pretty terrible with Black faces. In 2015, when Google unveiled its Photos app, it was found that it mislabeled Black people as gorillas. In 2016, it was found that the computer algorithm used in courtrooms to measure the risk assessment of defendants was more likely to rate Blacks with little to no criminal record as higher risks than Whites with longer rap sheets. Last October, Amazon was forced to scrap its AI-based recruitment algorithm because it proved to favor men’s applications over women’s.

There are a few ingredients that can be added to the elixir that will remedy the tech industry's diversity problems and improve the future of AI. First and foremost, tech companies (especially the giants) need to be more proactive in scouting, recruiting and hiring (and equally paying) more women and people of color, period. Though some have donated a meager amount of money out of their fortunes to diversity initiatives, the recurring low statistics of women and minorities show that that doesn’t count for much. Also, when it comes to AI, input from disciplines outside of science and technology (philosophy, law, education, ethics, sociology, etc.) would go a long way in making the best, most accurate software.

On our part, we should encourage more of our own to pursue STEM-based careers and master their crafts, so they are well-suited for critical positions at these companies. Furthermore, we should all be more well-versed in and accepting of AI. No matter how you feel about AI, it’s only going to become more of a factor in our existence. We need to read up and make our voices heard on these issues, so companies get the point.

In the end, tech companies that effectively diversify their workforce only have positives to gain from doing so. Primarily, research has shown that increasing gender and ethnic diversity at companies affects the bottom line: profits. A 2018 study by McKinsey shows that the companies in the top quartile for gender diversity were 21% more likely to outperform on profitability, while companies in the top quartile for ethnic/cultural diversity were 33% more likely to have industry-leading profitability. In 2017, CompTIA CEO Todd Thibodeaux said that increasing diversity could mean an extra $400 billion in revenue annually for the IT industry. Besides those bonuses, due to the number of perspectives, diversity has proven to produce smarter, more creative decisions.

Looking at these figures, in the tech industry’s quest to truly make the world a better place through its advancements, it would seem paramount for companies to serve a diverse gumbo with substantial contributions from various demographics as opposed to the homogeneously bland, unseasoned gruel it’s been serving. Break up the "old boys" club that has been fueling the tech industry since its inception, and diversify for a better tomorrow.