If you’re interested in sharing your opinion on any cultural, political or personal topic, create an account here and check out our how-to post to learn more.

But there has been a big improvement in getting African Americans access to care — the Affordable Care Act (ACA) is helping to close the health care racial gap.

What is the ACA?

The Affordable Care Act, commonly called Obamacare, was a law passed in 2010 that had the following goals:

- To support innovation of current health care technologies to lower the cost of health care, and;

- To expand the Medicaid program to cover more adults whose incomes fall below 138% of the federal poverty line.Since its passing, here are a few of the ways it’s already affected health care in the United States.

Effects of the ACA on health care

Parents were also allowed to keep adult children in their existing health insurance plans until their children turned 26, letting young adults save on healthcare costs longer until they can afford their own insurance.

Insurance companies were also banned from refusing to cover anyone with a pre-existing health condition. This is particularly important for African Americans, who have higher rates of diabetes and other chronic diseases.

And perhaps one of the most significant effects after the enactment of the ACA? Bridging the health care racial gap.

How is ACA is bridging the racial health gap

There are a few ways the ACA is making health care better and more accessible for non-white Americans, namely in these  ways:

Because of the Affordable Care Act, more Americans were able to enroll in health insurance plans. 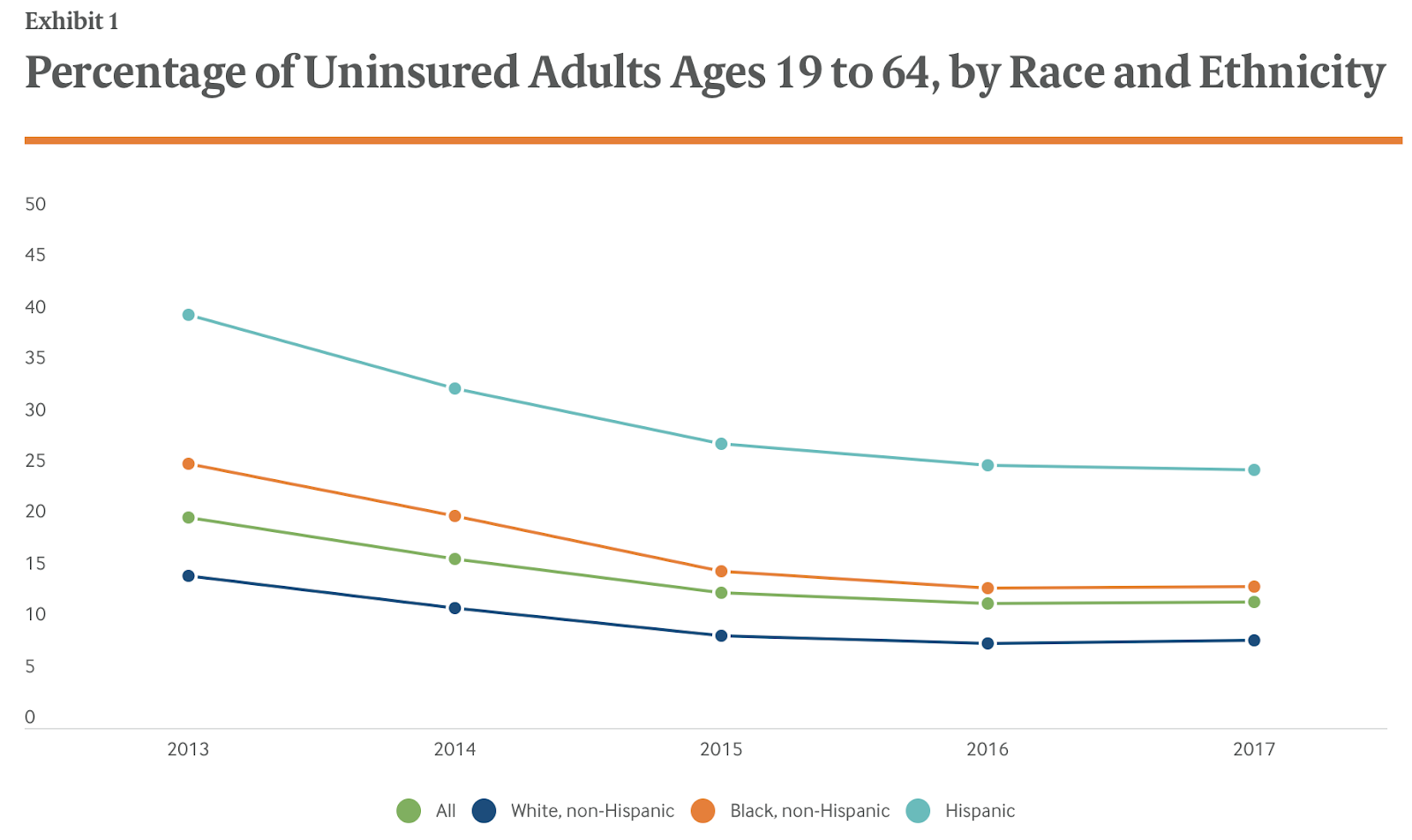 All racial groups saw decreased rates of uninsured persons from 2013 to 2017. (Image Source: The Commonwealth Fund)

Since the ACA’s passing in 2010, we’ve seen a significant shift in the number of uninsured adults, regardless of race.

From the chart above, you can see that in 2013, up to 40.2% of Hispanic persons — statistically making up most of the uninsured population in the United States — were uninsured, but that number has since dropped to 25.1% in 2017.

While all racial groups did see decreased rates of uninsured persons within their group, the most significant groups that felt these were minority groups.

This decrease is also tied to more affordable health insurance plans, especially since there were more available options for minority groups like immigrants.

The ACA didn’t just encourage people to get health insurance, it also made it possible to get access to health care.

In the graph below, we see that the number of people who claimed to forego seeing a doctor because of health care costs within a year had decreased between the years 2013 to 2018, with the largest decrease (6%) among the African American and Hispanic populations. 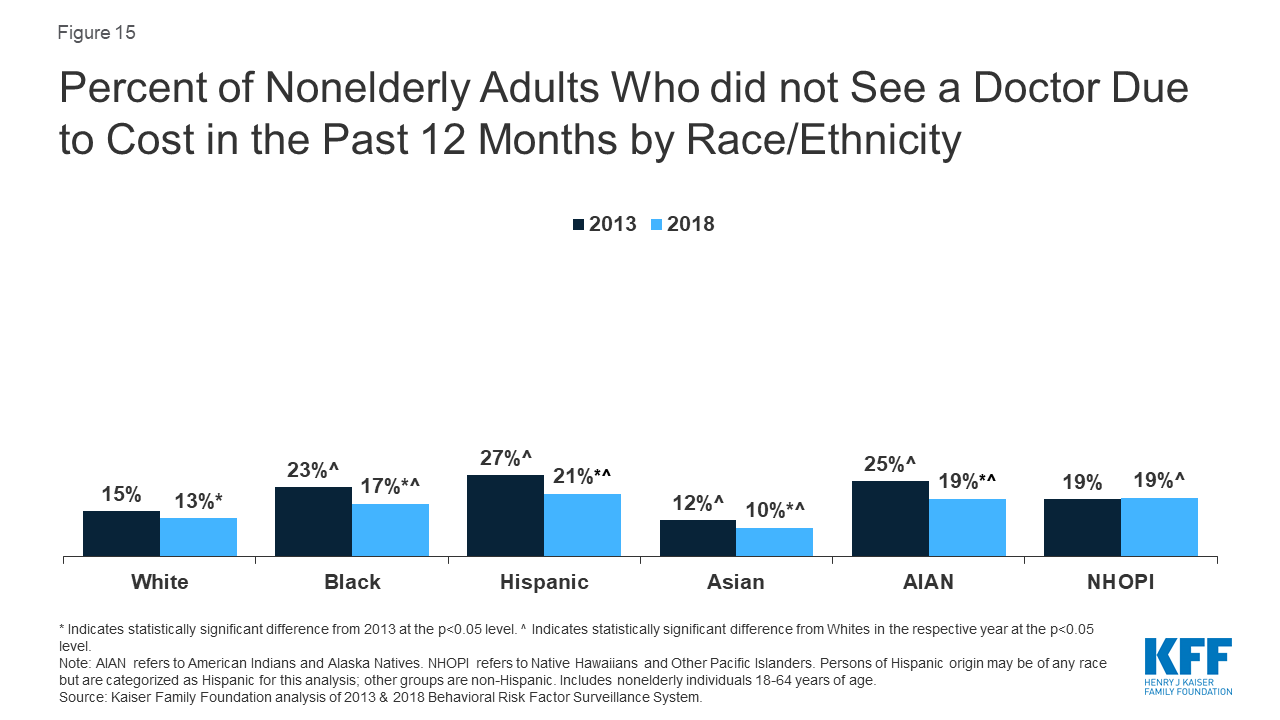 Less Americans across all racial groups in 2018 claimed that they did not see a doctor because of cost, as compared to 2013 findings. (Image Source: Kaiser Family Foundation Organization)

Because more people are insured, it’s easier for them to see doctors for treatments or prescriptions. With medical bills as the number one cause for bankruptcy in the United States, increased access to health care is incredibly important.

Because of this requirement, 71 million people across all racial groups got access to free annual physical exams, cancer screenings, vaccines and other primary care benefits.

In the graph below, we see the findings of how many people went a year without health or dental checks. Notably, there was a decrease in the white, African American, and Hispanic groups. 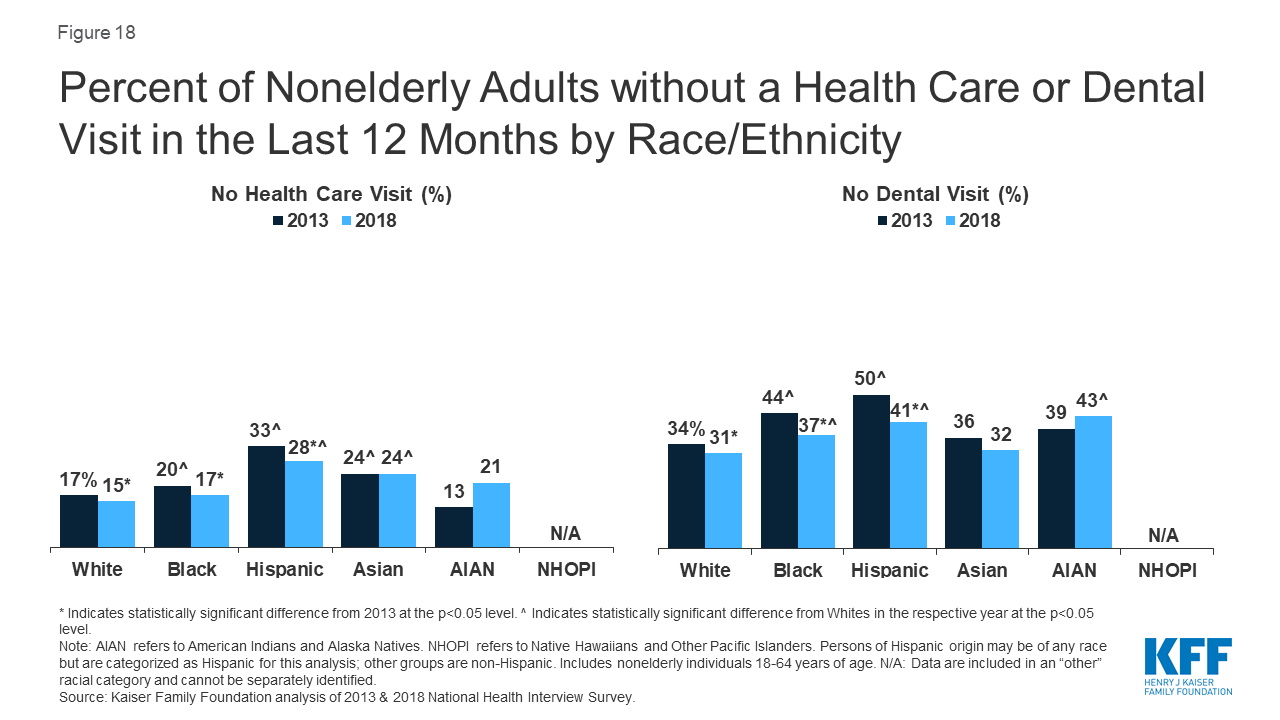 There was a decrease in the percentage of African Americans and Hispanics who went 12 months without health or dental checks from 2013 to 2018. (Image Source: Kaiser Family Foundation Organization)

Before the enactment of the ACA, insurers could decide to charge higher premiums if you were a woman or had a pre-existing condition. But after the law was passed, it’s now become illegal for any insurance company to charge you higher premiums based on things like gender, race and current health conditions.

This also extends to an insurance company not being able to drop you or refuse to cover your health care needs because of these factors.

Instead, there is a predetermined set of factors that insurance companies can use to justify charging higher premiums. These factors include things like age, your current state of residence, whether or not you’re a smoker, the number of people or dependents included in your plan or the metal category (or type of plan) that you purchased.

The Affordable Care Act was instrumental in bridging the existing health care racial gap. While it’s not a perfect system and there are still millions who remain uninsured or lack health care, we still see the positive effects the law has brought on over the past few years. Should lawmakers continue to support the policies that increase access to insurance, then we can keep inching closer to a day where minority groups get equal opportunities to access better health care services.