In 1796 22-year-old slave Ona Judge escaped from President George Washington's Philadelphia home and took a boat to Portsmouth, New Hampshire where she lived a life of freedom. Judge was born around 1773 to an enslaved seamstress and English tailor who worked as an indentured servant at George Washington's Mount Vernon plantation in Virgina. Judge primarily worked as a personal slave for First Lady Martha Washington in the presidential households in New York City and Philadelphia.

Judge was given the news that she was going to be a gift for the Washingtons' granddaughter and as the family prepared to return from a trip in between Congress sessions, Judge fled the family. She was the slave of the most important family in America at that time, so thanks to the help of the free locals, she was able to keep a low profile --even with a $10 bounty on her head.

Washington and his wife tried several of times to catch her, but despite their attempts, she remained free until she died in Greenland, NH in 1848.

Erica Armstrong Dunbar's latest book "Never Caught: The Washingtons' Relentless Pursuit of Their Runaway Slave, Ona Judge" not only tells the story of Judge's freedom but it shines a new light on Washington's role in slavery. 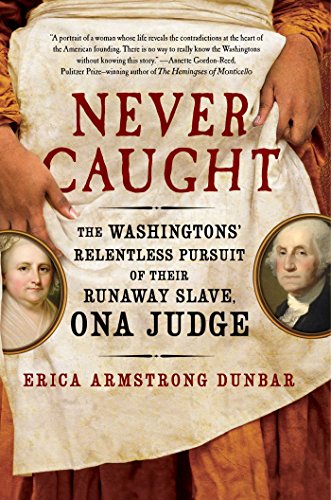 “Her story, her life reflects this underdog story in the most underdoggish of ways,” Dunbar said to the Associated Press.

“She was technically human property and was owned by the most important family in the new nation. Even with that being the case, she was able to carve out a life for herself. ... Ona’s story represents what many enslaved (individuals) wished, longed for, and that was a chance to be an independent person.”

On Wednesday, Oct. 4, the book was named as one of the 20 finalists for this year's National Book Awards. The five winners of this year's awards will be announced on Nov. 15 during a ceremony in NYC. 15 out of 20 of this year's nominees are women.

In support of the book, The Portsmouth Black Heritage Trail has started a tour of important locations related to Judge and her journey. The company currently has efforts underway to fund a trolly that will take tourists to Judge's final home in Greenland.

This Student Body President Helped Lead The Charge In Univ. Of Minnesota Limiting Its Contract With The Minneapolis Police Department

5 Things You Should Know About George Floyd, The 'Gentle Giant'

'Straight Up Like That': John Boyega Tells Racist White Fans To See Themselves Out Following George Floyd Post